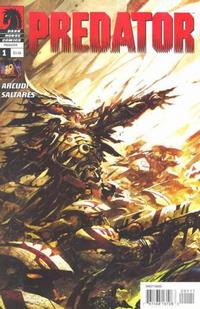 Setting in East Africa in the midst of civil war, a private military company, the Graham Directive Security, is assigned in providing security to American interest and on behalf of Secretary Mengistu. The company is led by war veteran Thorpe and newly arrived U.S. military observer Major Briggs. However, the two are uneasily indifferent towards to each other. Thorpe and Briggs lead a convoy patrol in providing a secure route for the Wecter Corps representatives.

After setting a checkpoint, Thorpe and Briggs notice that every block they had passed are strangely quiet and empty. Suspicious and at the recommendation of Thorpe, Briggs makes a call to Secretary Mengistu's security team in notice of further security investigation. But unbeknown to him, the security team is massacred by a new faction of Predators. One of the Predators disrupt the communication feed with Briggs. Unable to contact, Briggs, Thorpe and several PMCs see the damages on the next block and examine that the amount of damage is unusually large. Suddenly, a large explosion erupts at the location of their vehicles and follow by sounds of gunfire. The group arrives to where their convoy are and see the Predators from behind cover. Thrope decides to instead having the men firing on the aliens, he sneaks into one of the functioning armored SUV and drives it towards the Predators while activating the car's on-board sentry guns.

Retrieved from "https://heykidscomics.fandom.com/wiki/Predator_Vol_2_1?oldid=1466669"
Community content is available under CC-BY-SA unless otherwise noted.