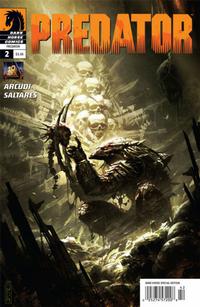 Thorpe attempts to run and gun down the Predators. One of the Predators jump onto his vehicle, but is shot and killed by Thorpe's PMCs. However, Thorpe is already distracted by the Predator and crashes the SUV into a building and fortunately survives from the car's deployed air bags. Thorpe is meet up with Major Briggs and the PMCs, in which he, instead of thanking them for saving his life, berates them for not being ordered to retreat back to their base. Thorpe and the others examine the dead Predator, in which the former seems to have knowledge about these aliens. One of the PMCs reports that all of their communication devices have lost their signals, thus unable in contacting to their base and forcing them to walk back on foot - as Thorpe insists as their remaining vehicles provides a large heat signature that the Predators will detect.

Thorpe, Briggs and the PMCs cautiously heads to a bank across a street. They are then came under fire from mortar shells belonging to the rebels. They manage to avoid the shelling, but are then attacked by a group of Predators. They are subdued after being hit by a Predator mortar shell. Thorpe is grasp by the throat by one of the Predators, but then sees another different Predator from his thermal goggles who then kills the Predator holding Thorpe and begins shooting its allies. The Predators quickly escapes and sparing Thorpe and the others. The humans are surprise of their luck and believe that someone is helping them, in which Thorpe is not entirely sure on the latter.

Retrieved from "https://heykidscomics.fandom.com/wiki/Predator_Vol_2_2?oldid=1466670"
Community content is available under CC-BY-SA unless otherwise noted.