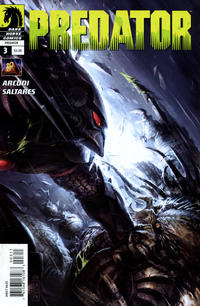 Thorpe, Briggs, and the surviving PMCs have finally arrive back to their base. After seeing to the wounded, it is discover that all electronic communication and devices are being jammed. This news greatly worries Thorpe and Briggs and have everyone armed and the base on alert. However, the base is not entirely invulnerable as one of the Predators have managed to infiltrate and killed their doctor, in which his decapitated body is hung on a skyscraper that is seen from the PMCs. Suddenly, the gruesome spectacle is blown away by the same other Predator that attacked its kin.

That night, the PMCs discuss on their adversaries in which they soon realize that they are being corralled rather than being easily killed by the Predators' mortars and cloaking abilities. They then focus on the other Predator that is attacking its kind and believe it's helping them, seeing it as a possible ally. However, Thorpe vehemently decry that it's not helping them and that it isn't different from the others. After a tense silence, Thorpe reveals he had previously encountered and was hunted by these creatures before, and that this conflict between the Predators wouldn't spare the humans in the end. Thorpe then orders everyone in preparing to leave by the next morning. However, the base come under attack by mortar fire, killing sixteen men and destroying every vehicle, preventing their escape.

Realizing that the nearest GDS outpost is forty-five miles away, Thorpe decide to solely travel out of the city from the aliens' jamming device in order to contact the outpost. However, Thorpe found himself unable to leave the city and hides inside a building overlooking the Predators' camp. Suddenly he is discover by the opposing the Predator.

Retrieved from "https://heykidscomics.fandom.com/wiki/Predator_Vol_2_3?oldid=1466671"
Community content is available under CC-BY-SA unless otherwise noted.