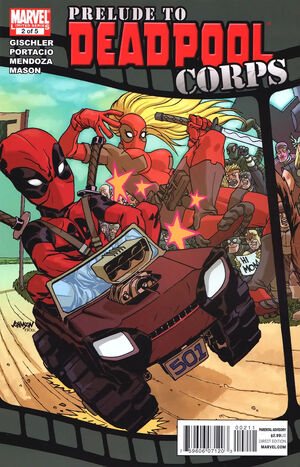 And most egregious of all, you ruined my chances with the hot piece of tail I was after.

Appearing in "The Kids Are (Mostly) All Right"Edit

Witness the birth of the most important super hero team ever in a universe-spanning event that will rock the month of March! Wade Wilson has been tapped to save the Universe, and to do that he’s going to need help. Enter: The sexy-but-insecure Lady Deadpool! The devious-but-lovable Headpool (a.k.a. the Zombie Deadpool Head)! The bratty-but-brilliant Kidpool! And the irascible mutt known as Dogpool! Individually, they’re, well, kind of messed up, but together, they’re the unstoppable force know as DPC.

Retrieved from "https://heykidscomics.fandom.com/wiki/Prelude_to_Deadpool_Corps_Vol_1_2?oldid=1450658"
Community content is available under CC-BY-SA unless otherwise noted.