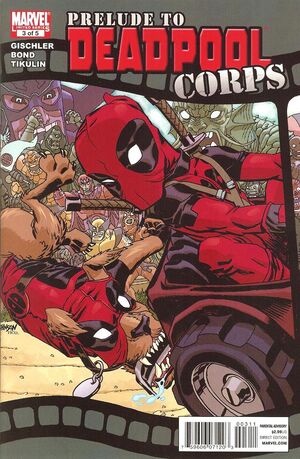 Appearing in "How much for that doggy in the Dumpster?"Edit

Synopsis for "How much for that doggy in the Dumpster?"Edit

In a lab somewhere, a dog is being experimented on by two scientists. He is dropped into a vat holding what looks like acid. When they pull the dog out he's dead. They throw the dog in a dumpster. The dog comes back to life looking all tattered like Deadpool. He wanders around looking for food and love but with his appearance people fear him. He tries to jump out in front of a car to end his life. He is hit and a couple circus performers stop to help him, when he jumps up. They take him in and train him for their act, while he wears a Deadpool mask. The two scientists that created him show up to the circus and realize what they created and decide to capture him. Deadpool Dog recognizes the two and begins to attack them. He chases them off. Back in their lab they added adamantium to the process and create a Wolverine dog. During another circus act they bring their dog and the two dogs begin to fight. During the fight, the original Deadpool walks through a portal and takes the dog back to his world.

Retrieved from "https://heykidscomics.fandom.com/wiki/Prelude_to_Deadpool_Corps_Vol_1_3?oldid=1750345"
Community content is available under CC-BY-SA unless otherwise noted.