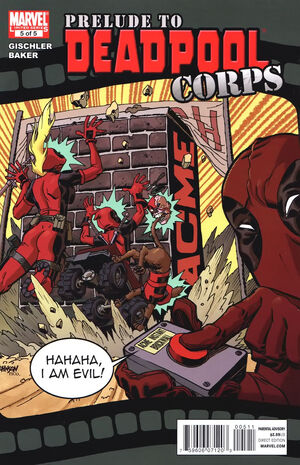 Deadpools Assemble! No. Wait. That's been done. Huh. What could we call ourselves? What could a corps of Deadpools call a bunch of Deadpools that are all Deadpool at our core? Hmmmmmmmm.

Appearing in "Part 5 of 5"Edit

Synopsis for "Part 5 of 5"Edit

Deadpool explains the whole reason he is getting all his different universe selves. The guy who hired the Deadpools is challenged by his master to have a fight to see whose team was stronger and more suited to the job. Headpool is off on his own talking to a strange alien about a space craft. The alien summons the rest of the team to the craft. Deadpools assigns nicknames to all his other selves. Kidpool's nickname would be Tito. Headpool's name, Shorty No Pockets. Dogpool's name, Cujo. Lady Deadpool's name, Boobs. They leave for their mission and come across a a large ship. Lady Deadpool boards the ship, a ship run by a race of evil Carebear look-a-likes. Lady Deadpool walks into the room with the race of bears and begins to kill them all. She reaches the bridge and a self destruct sequence is activated. We learn the mission was a game of capture the flag and the Deadpools win.

Retrieved from "https://heykidscomics.fandom.com/wiki/Prelude_to_Deadpool_Corps_Vol_1_5?oldid=1450661"
Community content is available under CC-BY-SA unless otherwise noted.