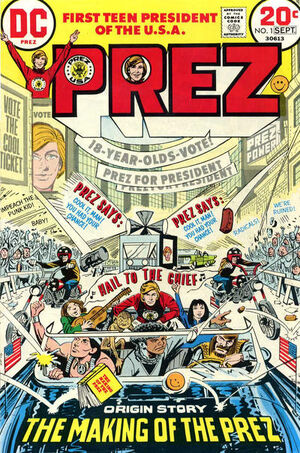 Appearing in "Oh Say Does That Star Spangled Banner Yet Wave?"Edit

Synopsis for "Oh Say Does That Star Spangled Banner Yet Wave?"Edit

Chapter One: The Clocks Of Steadfast

The little town of Steadfast is known for it's abundance of clocks. Unfortunately, it takes 30 minutes for all the clocks to finish chiming because none are on time. Prez Rickard, a teen-aged resident of Steadfast, is head of the local stock car club; his sleek racer "The Lollipop" is usually in front of the pack. When Prez wins the latest race and asks for his winning time, the two judges give him two different results, because neither could accurately set their watches. Later, at home with his mother and sister, Prez discusses the problem. The prior year, 18 year olds had won the right to vote. Prez is bothered because, if the clocks aren't on time, how can anyone possibly know when Election Day arrives. He decides that he's going to fix all the clocks of Steadfast. It takes a couple of weeks, but the determined Prez fulfills his promise.

At the slums of Central City, USA; the Mayor, Boss Smiley, runs a corrupt and filthy city. Unfortunately for him, the young people are beginning to protest. Smiley is concerned that the kids can hurt him at the ballet box, so he gives orders to his men to find a young, ambitious, and pliable candidate that the teens can relate to. They visit Smiley's cousin, Misery Marko the advertising genius, for advice. Smiley wants a young candidate to run for Senator. Marko says that, in order for their candidate to win, he must have a gimmick. He shows a newspaper, the Steadfast Times, to Boss Smiley. There is a front page article on Prez Rickard and how he repaired the town clocks. The following day, Smiley and his men approach Prez, telling the teen that they want him to run for Senator. When asked how he got a name like "Prez", the youth explains that when he was born his mother said "someday this baby will be President", so she named his accordingly. After thinking it over, Prez accepts Smiley's offer.

Traveling through a forest, on a road back to Central City, Boss Smiley tosses a lit cigar out of his car. It starts a brush fire, which is quickly put out by an American Indian named Eagle Free. The teen tells his animal friends that he feels a strange foreboding. He isn't yet aware that Boss Smiley is awarding a contract to build a super-highway through the forest (built, of course, by a company that Smiley himself owns). Several weeks later, candidate Prez Rickard attends a ceremony to launch construction of the road. He triggers the first dynamite charge. The explosion destroys the nearby dam, disturbing the once peaceful forest. Eagle Free leads his animals to the construction site, where they begin to destroy Smiley's machinery. After the devastation is complete, they run off into the forest. Prez tells Boss Smiley that he'll go after the vandal.

Soon afterward, Prez stumbles on the young Indian in a hidden cave. Prez tussles with Eagle Free, but the animals quickly put a stop to the fight. Eagle Free then explains that he lives in the cave shelter where his forefathers have lived for thousands of years, before the white men came to poison the forests, streams, and air. He has studied the animals as no man has ever done before, and has acquired their senses. He has uncovered the secrets of sound, scent, sight, and swiftness. Prez looks around and questions how a savage could possibly understand all the books, the chemicals, and the scientific equipment in the cave. Eagle Free explains that he had spent some years in the outside world, studied at universities, but prefers to live with nature, as his ancestors did. Prez says he'd like to live like that too, but Eagle Free tells Prez that he represents all that they detest. A confused Prez asks him to explain. Eagle Free tells the naive candidate that he is being used as a tool to pursue the evil deeds of Boss Smiley and his corrupt crew. He claims he can prove it, but Prez must spend a few days to learn the secrets he will need for such a dangerous mission.

Days later, under cover of night, Eagle Free and Prez sneak into Boss Smiley's skyscraper headquarters. They break into Smiley's office and rifle through his files, uncovering damning evidence of payoffs, swindles, and bribes. Smiley's men discover the break-in and hold the teens until Smiley arrives. Prez tells Boss Smiley that if he gets into office, he'll see to it that Smiley is through. Smiley responds that Prez will never get the chance, because he will renounce him and get a new candidate that will take orders. But it is too late, the clock strikes midnight... it is Election Day.

Prez wins the 1972 Congressional election. After the youth of America gain a majority in the Congress, they vote an amendment to the Constitution which lowers the required age of the President from 35 to 18. During the 1976 elections, Senator Prez Rickard, running on the new Flower Party ticket, upsets both the Republican and Democratic candidates to win the Presidency. His Truth-and-Love campaign has polarized the old and young generations. Prez assigns Eagle Free to be the new F.B.I. Chief. His Vice-President is only shown in shadows. The V.P. tells Prez that he already faces a lot of opposition from the over-thirty crowd, and there is already a movement to impeach him. Eagle Free says they've heard of that conspiracy, and know it is connected with a plot so ingenious, so sinister, that it could well destroy the world.

Retrieved from "https://heykidscomics.fandom.com/wiki/Prez_Vol_1_1?oldid=1469801"
Community content is available under CC-BY-SA unless otherwise noted.