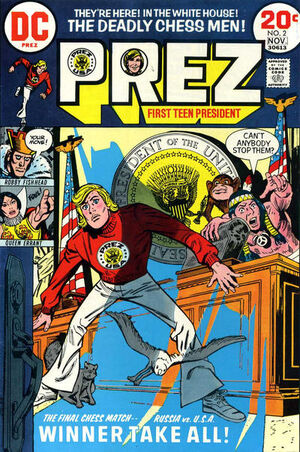 Appearing in "Invasion Of The Chessmen"Edit

Synopsis for "Invasion Of The Chessmen"Edit

Chapter One: Invasion Of The Chessmen

Prez and Eagle Free visit numerous countries around the world and are disturbed by the level of violence. The President addresses the United Nations, asking for peace in our time. Later, at the Washington Airport, Prez enters one of the limousines waiting for him, the others contain remarkable look-alikes to confuse any would-be assassin.

Back at the White House, Prez's secretary tells him that he is to give an award to the captain of the U.S. Olympic World Chess Championship Team. Prez is excited to meet the eccentric Robbie Fishhead, the man who calls himself Chessking. The President goes to greet Chessking, hoping to play a game or two with him, but discovers that he is already playing the Vice President. The V.P., a burly woman named Martha, is quickly beaten by the obnoxious chess master. The reporters and photographers soon arrive, and Chessking boasts that the Russians were pushovers. A few of the reporters ask him about Russian claims that he used hypnosis and electronic rays to defeat them. Chessking states that he'll play any Russian for a million dollars. The next day in Moscow, the angered White Russian Chess Team accepts their rival's challenge.

The day of the chess match comes. It is being held at Washington Stadium. Prez and Eagle Free watch as the two sides prepare for a live chess match, where the players are the pieces themselves. Two hours into the game, Chessking begins to rant and rave that the Russians are using electronic rays on him. He begins to attack the opposing team, and a fight breaks out. The Russian's White Queen vows to destroy her rival. Prez demands a full investigation of the whole disgraceful affair.

Chapter Three: Terror In The Capitol

A few days after the aborted chess match, robotic chess pieces begin exploding all over Washington. The nation's capital is in panic, so the Congress holds an emergency session. Senator Ebeneezer proclaims that the President has proven that he is unfit to run the country. Other elder Congressmen agree. Later, as the terror continues, Prez summons Senator Ebeneezer to his office. The angry Senator and a collegue inform Prez that they are instituting impeachment proceedings as soon as they can muster enough support. After they leave, Prez tells Martha to contact Eagle Free.

Eagle Free asks Prez to meet him at his place, where there is sure to be no bugging devices. Martha makes use of the President's look-alikes to sneak Prez out of the White House. He arrives at Eagle Free's teepee headquarters, located on the banks of the Potomac River. That night, Eagle Free brings Prez and his animal friends to the roof of the Russian Embassy. From there, they spot more mechanical chess pieces heading towards the Treasury Building. They are unable to stop the marauding robots, but Eagle Free realizes that they may find an answer at Washington's power plant. They meet with one of the plant's managers at dawn. He shows them that an unusual amount of electrical power is being consumed in the Silver Springs area. Eagle Free recalls that that is where the home of Chessking is located.

Shortly, Prez and Eagle Free arrive at the chess master's home, which is a veritable fortress surrounded by an army of chess robots. The pieces encircle them, then the chess square upon which they are standing falls open. They tumble into the basement of the fortress. They are shocked to discover Chessking in chains, and the Russian Queen at the controls of his computer. She proclaims herself the new world chess champion, then pulls a machine gun on the duo. As she prepares to fire, some of Eagle Free's winged friends arrive and disarm her. She is easily overpowered, and Chessking is freed.

Later, at the White House, Martha states that all the money stolen from the Treasury was recovered except for one new dollar bill. Prez produces the bill and asks Martha to return it to the Treasury. The new bill displays the face of Prez Rickard instead of George Washington! When Martha asks him how he got it, he responds that it'll remain his little secret.

On May 3rd, around 8:35pm, Senator McNitty arrives at an urgent meeting in the President's office to discuss the Right To Gun Control amendment. He tells Prez that the amendment must be killed for the safety of all Americans. Suddenly, the lights go out, and a sharpshooter's bullet shatters a window. Twenty minutes later, an ambulance is seen leaving the White House.

Retrieved from "https://heykidscomics.fandom.com/wiki/Prez_Vol_1_2?oldid=1469802"
Community content is available under CC-BY-SA unless otherwise noted.