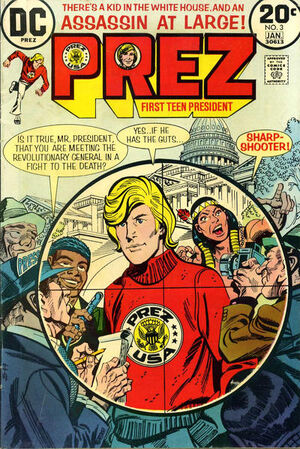 Appearing in "Invasion Of America"Edit

Synopsis for "Invasion Of America"Edit

Chapter One: Invasion Of America

A group of soldiers, dressed in Revolutionary War uniforms, are lead by a General Washington down Pennsylvania Avenue. When they reach the White House, they fire a missile through one of the windows. Eagle Free and two armed guards are shocked when a dwarf emerges from the shell. The little intruder is brought before the President. He states that he is a Washington Minuteman, and that this mock invasion serves to dramatize their objection to his bill to outlaw firearms. Senator Fireside arrives and congratulates the dwarf, Baron Von Stomp, for the good show. The Senator tells Prez to take this as a warning. After ejecting the Senator and Von Stomp, Prez asks his F.B.I. Chief about the Minutemen. Eagle Free tells him that they are an extreme right-wing organization whose members have been storing hordes of arms all over the country. They are led by Gregor Washington, the great-great-grandnephew of George Washington. Eagle Free informs the President that they have files on all their leaders, and are also infiltrating their ranks.

It is December 1977, and the Minutemen are camped in a small village near Philadelphia. The men are lining up to receive their monthly stipend, which is comprised of counterfeit ten dollar bills. On February 18th, Eagle Free reports to the President that the Minutemen are without funds and are tormented by the raging winter. The President vows to sign the firearms bill first thing in the morning. After Eagle Free leaves, Prez stands at his office window. At exactly midnight, a sharpshooter's bullet strikes the President. All through the nation, millions of Americans grieve and pray for the Prez.

General Gregor Washington decides that the time to strike has arrived. Von Stomp tells him that the men are hungry and cannot proceed. The counterfeit money they have printed is not of high enough quality to be useful. When Von Stomp shows Gregor the new dollar bill, which replaces the picture of his ancestor with an image of Prez Rickard, the General is infuriated. Von Stomp says he has a plan, and calls for Imperiale, who carries in a large machine. Imperiale works at the Treasury, but is a secret member of their organization. He proposes that they counterfeit one dollar bills instead. Nobody would suspect a one dollar counterfeit bill because they are usually too expensive to produce, but his new machine turns out a hundred perfect copies a minute. The new dollar machine turns out enough money to feed, clothe, and defrost the troops. A few days later, Gregor's forces advance.

Prez and the Army meet Eagle Free at Nature Nation, his teepee headquarters. Eagle Free informs the President that the Minutemen have captured General Patting of the National Guard. Prez tells the Army General that they must find a way to stop the Minutemen without causing a blood bath. The President asks his F.B.I Chief for his advice. Eagle Free says that when warring Indian tribes wished to avoid a massacre, the two rival chiefs fought each other to the death. Prez tells his friend to contact Gregor and deliver his challenge. Gregor accepts and Eagle Free leaves to arrange for a truce. Gregor then sends for Sergeant Hood, their black belt karate instructor, who is disguised to resemble the General.

Chapter Five: Fight To The Finish

As both sides meet on the battlefield, Prez immediately notices the size of his opponent, and knows he is not Gregor. Eagle Free tells him not to waiver, and the combat begins. Prez takes a beating but, as the brutish Minuteman moves in for the kill, the Prez lashes out with a last desperate blow and stuns his opponent. Prez is so worked up that Eagle Free has to intervene and stop him from killing his enemy. Gregor refuses to surrender, and orders his men to charge. Because the Army is under orders not to fire, the Minutemen break through the defense lines and head towards the Pentagon. Prez has no choice but to order General Patting to call out his forces. In the middle to the bloodshed, Prez orders the soldiers to stop. Gregor captures Prez, but suddenly Sergeant Hood turns on his General, quickly ending the battle. Eagle Free informs the President that Sergeant Hood is one of his F.B.I. infiltrators.

The next day, Prez addresses the combined houses of Congress. He tells them that he has passed from a callow youth to a mature man, and has learned from this tragedy that force cannot be met with cool phrases, love, or flowers. The older Congressmen finally become accepting of the new President, while the younger ones call him a traitor and warmonger. Prez tells them all that it is time to bind up the nation's wounds. Later, at the White House, Prez and Eagle Free wonder just who the assassin really is.

Retrieved from "https://heykidscomics.fandom.com/wiki/Prez_Vol_1_3?oldid=1469804"
Community content is available under CC-BY-SA unless otherwise noted.