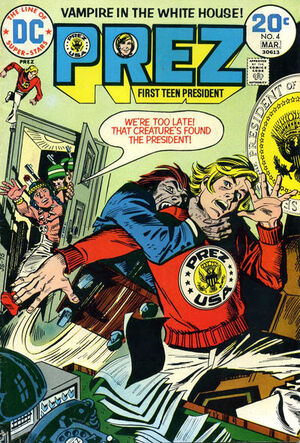 Appearing in "Vampire In The White House"Edit

Synopsis for "Vampire In The White House"Edit

Chapter One: Vampire In The White House

Prez and Eagle Free are in the Republic of Moravia. They are being thanked by its government and people for the U.S. aid that has enabled them to build a new canal with which they can irrigate their crops. The President can't help but hold his nose at an offensive odor. The government officials apologize, stating that it is a custom that they wear chains of garlic around their necks. As they leave in the President's superjet, The Freebee, Prez and Eagle Free note a dark cloud over the land next to Moravia. Later, back at the White House, Prez assures the delegation from the People's Republic of China that the U.S. has no plans to take over Moravia.

That night, on the banks of the Potomac, Eagle Free is awakened by the sound of flapping wings. He and his monkey friend, Ibsen, investigate. Eagle Free sees a giant bat approaching the White House, and rushes to the President's bedroom to wake him. They and the military head to the roof, where a bat-shaped helicopter lands. The door of the Transylvania Airlines copter opens, revealing a wolf wearing a suit and carrying a small coffin-like briefcase! The soldiers attack the creature and struggle through the early hours, until the sun rises. The werewolf transforms into a diplomat, who has come for a summit meeting with the President. He introduces himself as Wolfman, ambassador from Transylvania. Ambassador Wolfman tells the President that Transylvania borders on Moravia, and the U.S. has caused great distress for his people.

Later, in the President's study, the ambassador explains that the canal that they built in Moravia has drained Transylvania's lakes and reservoirs. They demand that it be destroyed, but Prez refuses. Given this response, the ambassador then states that he has been instructed to declare a state of war between Transylvania and the U.S., on orders of his royal highness Count Dracula the First. After the ambassador leaves, Prez and Eagle Free comment that Dracula was born 350 years ago, and died with a stake in his heart! Neither of the men notice that the ambassador has left his coffin-shaped briefcase behind.

Prez calls an emergency meeting of his cabinet. He states that it seems they are at war with a country they can't even find. Eagle Free concludes that it must be under the dark cloud next to Moravia. One of his men brings in an ancient book from the Library of Congress which claims that Transylvania is a land of vampires. Later that night, in the President's study, the ambassador's coffin-shaped briefcase opens. A crippled Count Dracula, who has had both his legs amputated, crawls out and wheels himself down to the President's bedroom on a dolly. Just as Dracula is about to turn Prez into one of the living dead, Eagle Free bursts in screaming for the President to awaken. Eagle Free pushes Dracula off of the bed, stating that he suddenly realized that the strange suitcase was a coffin, and that Wolfman had left it behind. The vampire tells them that they will not stop him. Seven times he has been stabbed through the heart, and seven times he has risen from the grave. He has been tormented, and crippled, but there is still enough left to destroy them both. Dracula attacks them, but Eagle Free pulls out a disk which appears to bear the symbol of a Nazi swastika. The youth reveals that it is the Indian hooked cross, and that the Great Spirit will strike him down if he advances beyond the sign. Temporarily defeated, Dracula escapes into the night.

Count Dracula escapes in the Transylvanian helicopter. The next morning, the ambassador from Moravia arrives to report an urgent message from his government. The Transylvanians have concocted a plot so horrible that if defies belief. They plan on using their one plane to release a cargo of rabid bats over the U.S. Capitol. Prez tells Eagle Free that they must wipe Transylvania off the map before that plane is dispatched. Eagle Free says it will require an act of Congress, so he arranges for a session of the House at once. Later, when Prez asks the Congress for emergency powers, he is surprised to learn that no one believes him. Some demand a federal investigation of his administration, while others want him to resign.

Later, in Prez's office, Eagle Free suggests they launch a kamikaze attack on the Transylvanian jet with the help of his birds. Eagle Free takes Prez to his teepee headquarters, and the two hold a farewell ceremony for the brave birds. A bat-shaped jet approaches Washington, and the birds take flight. The swarm fly directly into the jet's intake, damaging the engines. The jet struggles for altitude, but the engines finally grind to a halt. The plane, with it's two occupants, Dracula and Wolfman, plunges to a watery grave. Later, Prez and Eagle Free ponder their future. Prez faces a federal court inquiry. Eagle Free is disturbed by the fact that, if Transylvania surrenders, the U.S. will likely send them money to build them up again.

Retrieved from "https://heykidscomics.fandom.com/wiki/Prez_Vol_1_4?oldid=1469805"
Community content is available under CC-BY-SA unless otherwise noted.