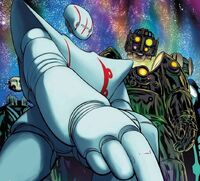 Base Of Operations
World Farm

The Progenitors are an eons-old race living in a controlled planetary system called the World Farm at the far end of the universe.[1] There are different types of Progenitors including the Destroyer, Exterminator, Harvester, Ordinator, and Overlord-Classes, each with a different task within the World Farm.[2]

A millennia ago, the Progenitors experimented on the primitive Kree, mutating them with Primagen to their current evolutionary state.[1] The Krees were deemed as failures since their evolution stopped before they could become useful for the Progenitors.[3] When the Progenitors took notice of the Inhumans, they invented the Skyspears, diagnostic tools flung from the World Farm towards Inhuman population centers with the objective to study them.[4]

A group of Inhumans aboard the ship Astarion learned of the Progenitors' existence while looking for an alternative to Terrigen, all of which had been destroyed by Medusa.[1] After investigating a Skyspear which landed on Centauri-IV, this group of Inhumans traced its trajectory back to the World Farm. The explorers were attacked by a Harvester-Class Progenitor as soon as they approached the World Farm,[1] and barely made it alive to a Primagen deposit[5] after killing an Ordinator-Class Progenitor.[2] After defeating an Exterminator and a Destroyer-Class Progenitor sent to deal with them, the explorers escaped with samples of Primagen and returned to Earth. The Inhuman Gorgon stayed behind to buy the rest of the crew time to escape. He boosted his powers with Primagen and destroyed the swarm of Progenitors that were about to attack the expeditionary crew as well as the planet where they were standing.[5]

Having become impressed by the potential of the Inhuman visitors, the Progenitors launched a small-scale attack on Earth in other to assimilate the planet, but stopped by the Moon, where the Inhumans were stationed. Since they had used telepathy and empathic control to defeat the Progenitors they faced, Maximus the Mad determined the best battleground to confront the invading Progenitors was the Astral Plane. An Overlord-Class Progenitor attempted to absorb Medusa's mind into their collective consciousness right as she was in the Astral Plane and had acquired the resolve necessary for a sample of Primagen to work on her. The recoil caused by the assimilation attempt destroyed the Progenitors. Due to this unexpected turn of events, the Ordinator-Class Progenitors that were overseeing the attack from the World Farm determined to leave the Earth alone.[6]

In this alternate future the Progenitors had decimated most of planet Earth. They also transformed Black Bolt and Medusa into a gestalt member of their race.[7]

The Progenitors are beings of massive power. The Harvester-Class Progenitor displayed telekinesis, being capable of effortlessly stopping the Astarion mid-flight and destroy it.[1] The Ordinator-Class possessed the ability to fire powerful blasts from different parts of its body. Progenitors also seem to survive living in the center of a star.[2]

Type of Government: Monarchy: The Progenitors appear to be ruled by a monarch, the Overlord-Class Progenitor.[2]
Level of Technology: Extremely Advanced: Marvel Boy noticed the Progenitors' technology is "as far beyond Kree tech as the Kree are beyond us." The Progenitors created quantum computers the size of molecules.[2]

The Progenitors are a Type IV civilization in the Kardashev scale.[3][8]
Cultural Traits: Cultural traits unknown.
Representatives: No Known representatives.