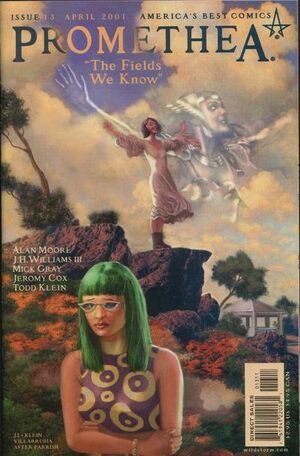 When I said I was going away, Stace...I meant from earth... I'm going on… after Barbara.

Appearing in "The Fields We Know"Edit

Synopsis for "The Fields We Know"Edit

Sophie Bangs begins her search for Barbara. She has her friend, Stacia Vanderveer, take over the role of Promethea since she does not know when she'll be back. Stacia then merges with Grace and is transformed into the substitute Promethea. After talking to the Universe, Sophie goes off to search for Barbara by stepping onto a boat steered by Charon. He takes her down the river and tells her that she's now dead.

Retrieved from "https://heykidscomics.fandom.com/wiki/Promethea_Vol_1_13?oldid=1469779"
Community content is available under CC-BY-SA unless otherwise noted.