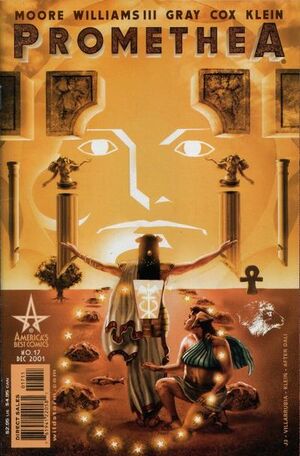 It’s only our worldly minds that order events into sequences. Into past, present and future

In Malkuth, Promethea, a merged Vanderveer and Brannagh, locate Mayor Sonny Baskerville. She suddenly has a vision of Sophie Bangs and Barbara in Geburah.

Those two are actually in Tiphereth at the moment, a location representing beauty, harmony and the sun. They meet up with Boo-Boo Ramirez, who is Barbara's younger self at age 15. Boo-Boo introduces them to Apollo and the "Risen Gods" including, Christ on the Cross. The three then continue down highway twenty-two which leads to Geburah, the place "visioned" earlier by Vanderveer and Brannagh.

Retrieved from "https://heykidscomics.fandom.com/wiki/Promethea_Vol_1_17?oldid=1469787"
Community content is available under CC-BY-SA unless otherwise noted.