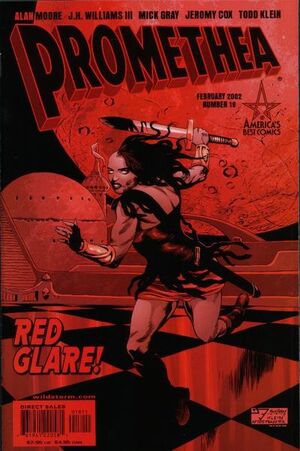 If Qlippoths are husks left when good departs, does that mean evil isn’t a real thing, in itself? It's just an absence of good, like dark's an absence of light?

Appearing in "Life on Mars"Edit

Synopsis for "Life on Mars"Edit

In Malkuth, F.B.I. agents Lucille Ball and Karen Breughel are in pursuit of Promethea (the merged Miss Brannagh and Vanderveer). However, the heroine is busy confronting a legion of demons which are inhabiting Mayor Baskerville. She overcomes the demons by inhaling them inside of her. She then escapes from the two F.B.I. agents.

Meanwhile, Sophie Bangs, Barbara and Boo-Boo Ramirez arrive at Geburah, a completely red dimension. They become trapped by Asmodeus, a demon in the form of a giant spider. Instead of fighting him with hatred and anger, they praise him with respect. This tactic calms the spider-demon, and causes him to show his true self, which is actually human. After saying farewell to their would-be foe, the three women head off into the land of "Mercy."

Retrieved from "https://heykidscomics.fandom.com/wiki/Promethea_Vol_1_18?oldid=1610601"
Community content is available under CC-BY-SA unless otherwise noted.