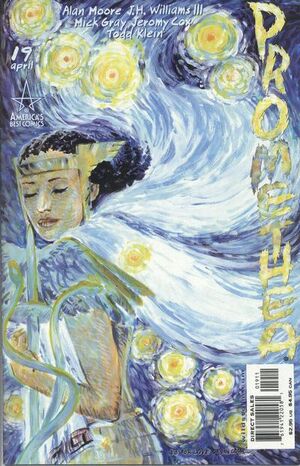 It's very empowering, don’t you think? When we finally face up to what we are?

While walking along the "Hermit Path," Promethea meets her original father. After he gathers his daughter's essence, the two float away from Sophie, Barbara and Barbara's younger self, Boo-Boo Ramirez.

The three then continue walking and soon meet Juan Philippe Estrada, Sophie's father. They speak briefly and Boo-Boo explains that she must now abandon Barbara and stay here with Mr. Estrada. Sophie and Barbara leave them and come to the end of the road, which is at a cliff's edge. A storm is beginning to brew and the bridge is no longer there. Nonetheless, holding hands they leap into the Abyss together, "Thelma and Louise" style.

Retrieved from "https://heykidscomics.fandom.com/wiki/Promethea_Vol_1_19?oldid=1610602"
Community content is available under CC-BY-SA unless otherwise noted.