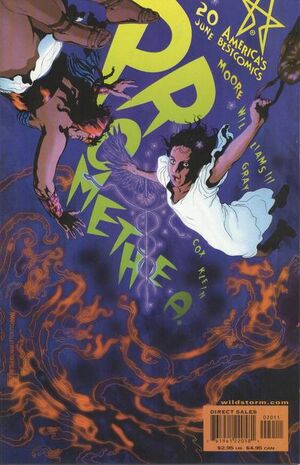 It was like something H.P. Lovecraft pulled out of his nose.

Appearing in "The Stars are but Thistles"Edit

Synopsis for "The Stars are but Thistles"Edit

Barbara and Sophie fall into the Abyss and arrive at Daath. They encounter Aleister Crowley, who's in female form and riding a camel. After a brief conversation, the two continue their journey searching for Barbara's husband, Steve. They come upon a black tower and find a younger version of Austin Osman Spare, but he doesn't remember them. Spare informs them that they are traveling through "the dreadful absence, a crack in everything." Barbara and Sophie began to understand that they're intellectually, emotionally and spiritually lost. They then witness Aleister Crowley, now as a male, summoning Choronzon and then suddenly the two disintegrate and wind up at Binah.

Retrieved from "https://heykidscomics.fandom.com/wiki/Promethea_Vol_1_20?oldid=1610603"
Community content is available under CC-BY-SA unless otherwise noted.