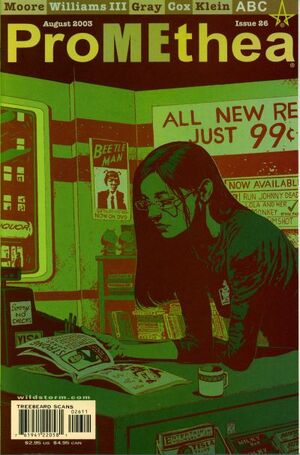 I just feel there may be forces involved here that I don’t understand. I feel I could make a wrong move and… I don’t know. Cause some disaster.

Sophie Bangs is working in a video store in Millennium City.

F.B.I. agents Ball and Breughel visit Tom Strong and order him to find Promethea, as they believe she will be the cause of the Apocalypse. With the help of his daughter and Solomon, the talking ape, Tom finally manages to corner Sophie on a rooftop.

Retrieved from "https://heykidscomics.fandom.com/wiki/Promethea_Vol_1_26?oldid=1469789"
Community content is available under CC-BY-SA unless otherwise noted.