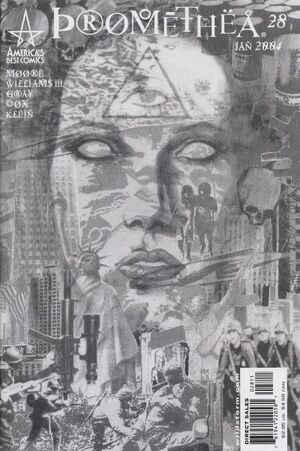 There'll be a lot of individual destinies arriving at this place in the times ahead. Converging... Coming together.

Appearing in "Don't They Know It's the End of the World?"Edit

Synopsis for "Don't They Know It's the End of the World?"Edit

After three years on the run in Millennium City, Promethea returns to New York, but before she commences with the apocalypse, she first releases Jack Faust, Dr. Dennis Drucker and Stacia from custody of the F.B.I.

As if things couldn't get worse, Stan from Five Swell Guys has gone rogue by activating multiple Painted Dolls to wash up on New York harbor's shore to begin their killing spree.

Retrieved from "https://heykidscomics.fandom.com/wiki/Promethea_Vol_1_28?oldid=1469791"
Community content is available under CC-BY-SA unless otherwise noted.