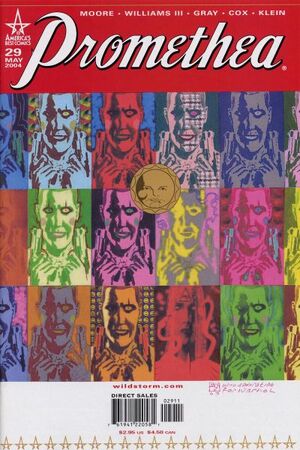 Oh, they said God was dead. All those beatniks and snooty-ass Frenchmen. Not me. I knew better. I said to them 'Wait, boys!' Don’t break cover yet awhile. He might be faking. That's what I said, but did they listen? Ohh no. They went right ahead and organized God's funeral. Well, don't count your chickens before they come home to roost. That's what I always say. And if you want a job done properly Do it yourself.

Appearing in "Valley of the Dolls"Edit

Synopsis for "Valley of the Dolls"Edit

After multiple Painted Dolls wash up onshore in New York's harbor, they end up killing one another until only two are left. One becomes mobbed by fans who want to be killed before the world ends. The other leaves in haste in order to locate his creator, Stan from Five Swell Guys.

Meanwhile, the people who Promethea has gathered in Trish Bangs' apartment, begin to wander down the hallway and enter various rooms. Each of them are reunited with their version of Promethea; Stacia with Grace Brannagh and Dr. Dennis Drucker with Bill Woolcott.

Elsewhere, America's Best are putting together a Doomsday Device to help prevent the apocalypse.

Retrieved from "https://heykidscomics.fandom.com/wiki/Promethea_Vol_1_29?oldid=1469793"
Community content is available under CC-BY-SA unless otherwise noted.