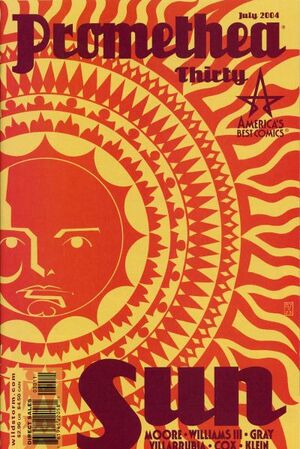 You're everybody. That's how it is with stories. They're always really about you, aren't they. And they have a beginning... and there's always an ending. For all stories.

Appearing in "Everything Must Go!"Edit

Synopsis for "Everything Must Go!"Edit

Reality and perception become even more distorted as the apocalypse continues to extend its reach from Sophie's mom's apartment to encompass the New York City and the world.

Promethea awaits the arrival of various people who converge at her mom's place in order to put a stop to the end of the world — including America's Best, and perhaps more significantly, the last Painted Doll.

Retrieved from "https://heykidscomics.fandom.com/wiki/Promethea_Vol_1_30?oldid=1469795"
Community content is available under CC-BY-SA unless otherwise noted.