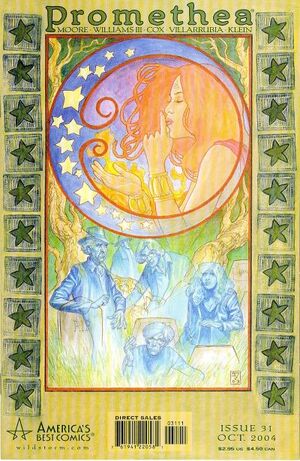 Live knowing that you are already dust, not bygone legends but your once and future selves.

Appearing in "The Radiant, Heavenly City"Edit

Synopsis for "The Radiant, Heavenly City"Edit

The Apocalypse has happened and life goes on.

Sophie Bangs is back in college and plans on marring her boyfriend, Carl. She's no longer Promethea, who's spirit has moved on from her.

Stace is dating ex-FBI agent Lucille Ball at the moment.

The Painted Doll has joined the Four Swell Guys.

Meanwhile, in the Immateria, the former Promethea's wonder if the original spirit, from the sixteenth century, has completed her task and is finally resting with her father. They amusingly ponder if another host is needed to help people adjust to life in the new world.

Retrieved from "https://heykidscomics.fandom.com/wiki/Promethea_Vol_1_31?oldid=1469797"
Community content is available under CC-BY-SA unless otherwise noted.