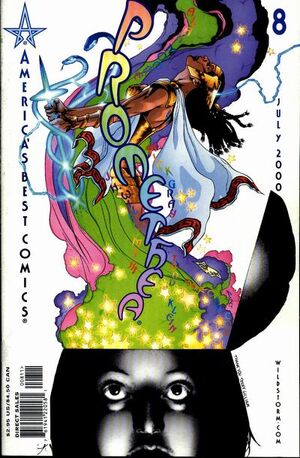 Appearing in "Guys and Dolls"Edit

Synopsis for "Guys and Dolls"Edit

The hospital where Barbara and Sophie are recovering is attacked by demons, which were summoned by Benny Solomon. Sophie manages to conjure up previous versions of Promethea, manifesting her friend, a nurse and her own mother as hosts to the magical heroine. Barbara also becomes a Promethea and they all fight the demons. Meanwhile, the villain, the Painted Doll, makes his escape by blowing up a section of the hospital, killing Benny Solomon. Panicked, the remaining demons break free by flying into Mayor Baskerville's mouth, and hiding within his soul.

Retrieved from "https://heykidscomics.fandom.com/wiki/Promethea_Vol_1_8?oldid=1549065"
Community content is available under CC-BY-SA unless otherwise noted.