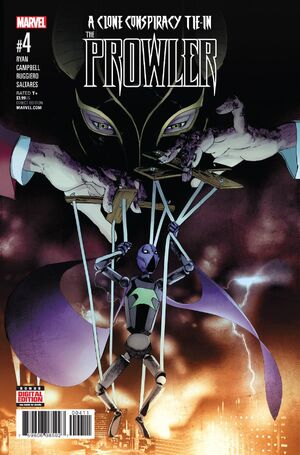 • Prowler’s felt right at home working for NEW U. After all, they’re a force for good.

• But after a painful confrontation with the new Electro and a bare-knuckle brawl with Julia Carpenter, a.k.a. MADAME WEB, Prowler’s second-guessing himself and New U’s mission…

• …and THE JACKAL doesn’t tolerate dissent, especially when it could jeopardize everything he’s worked to build!

Retrieved from "https://heykidscomics.fandom.com/wiki/Prowler_Vol_2_4?oldid=1652408"
Community content is available under CC-BY-SA unless otherwise noted.