Part of the 'Dead No More: The Clone Conspiracy' event 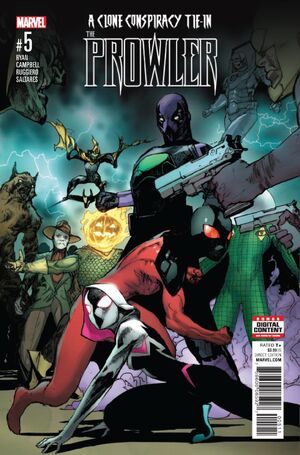 • For months, the Jackal has been resurrecting superhumans in secret, including THE PROWLER, who’s been operating as his right-hand man!

• But as the Jackal’s carefully-stacked house of cards starts to tumble, some of the super villains he’s brought back to life will try to settle some old scores with Jackal’s favorite deputy…

Retrieved from "https://heykidscomics.fandom.com/wiki/Prowler_Vol_2_5?oldid=1652409"
Community content is available under CC-BY-SA unless otherwise noted.