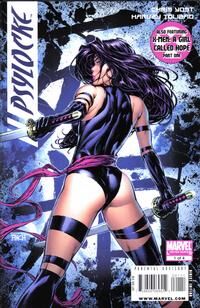 Psylocke has returned to the X-Men! Following the defeat of Madelyne Pryor and her Sisterhood, Psylocke travels to Japan to re-inter her former body in its proper resting place. But when a swarm of Hand ninjas attack Psylocke and do the unspeakable under orders from Matsu’o—the assassin originally responsible for transplanting Psylocke’s mind into the body of an Asian ninja—Psylocke determines that Matsu’o is one loose end that can no longer be left unresolved. It’s a tale of carnage and revenge, brought to you by superstars Chris Yost (X-FORCE) and Harvey Tolibao (AVENGERS: THE INITIATIVE)!

Retrieved from "https://heykidscomics.fandom.com/wiki/Psylocke_Vol_1_1?oldid=1650244"
Community content is available under CC-BY-SA unless otherwise noted.