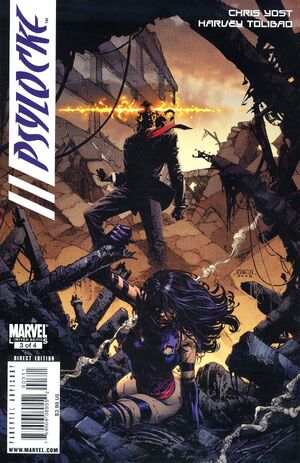 Matsu'o's not done paying. So he doesn't get to die. Ever.

Psylocke wants Matsu’o Tsurayaba dead for what he’s done to her. But it turns out that she’s not the only one who wants his head. Now, Psylocke is in a race against a super-powered assassin to get to Matsu’o first...because if anyone is going to end Matsu’o, it’s going to be her.

Retrieved from "https://heykidscomics.fandom.com/wiki/Psylocke_Vol_1_3?oldid=1450655"
Community content is available under CC-BY-SA unless otherwise noted.