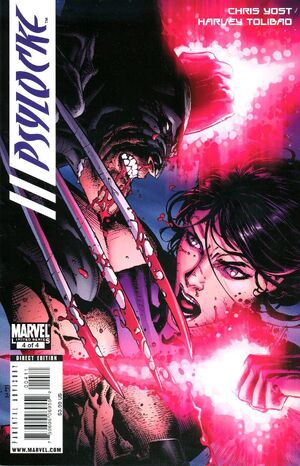 This is it. Psylocke has cut her way through ninjas, bodyguards and super-powered assassins on her mission to exact revenge upon Matsu’o Tsurayaba. With her target in sight, there’s only one more opponent standing between her and what she wants. And it may just be the fight of her life. Don’t miss the epic conclusion of “KILL MATSU’O”, where Psylocke takes up her sword against the one man who might just give her a run for her money: WOLVERINE.

Retrieved from "https://heykidscomics.fandom.com/wiki/Psylocke_Vol_1_4?oldid=1650245"
Community content is available under CC-BY-SA unless otherwise noted.