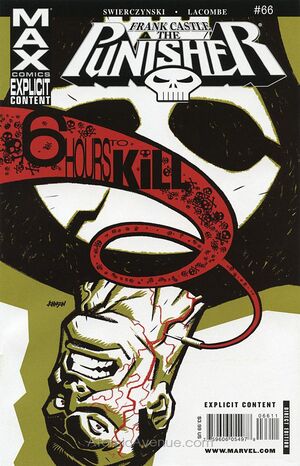 I've always known that what I do will get me killed someday. I just never thought I'd have advance notice. Well, six hours left. Better make the most of them.

The Punisher always knew he’d die on the job. But he didn’t know he’d have an expiration date. After busting up a slave ring in downtown Philadelphia, Frank Castle has been tricked, trapped, gassed, strapped to a table and injected with a serum that will turn him into a 220-pound corpse by dawn -- six hours from now. The people who grabbed him want him to do a simple little job and then they’ll give him the antidote -- simple, right? Guess again. The Punisher is nobody’s errand boy. There’s only one thing he wants to do before he dies: Take as many bastards as he can with him.

Retrieved from "https://heykidscomics.fandom.com/wiki/Punisher:_Frank_Castle_Max_Vol_1_66?oldid=1450113"
Community content is available under CC-BY-SA unless otherwise noted.