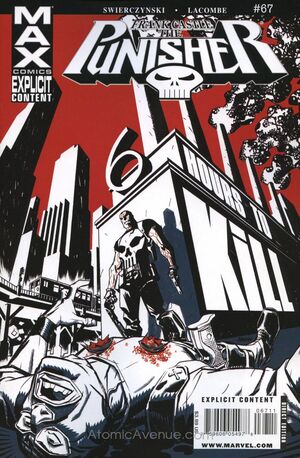 Thought the last name rang a bell. Say hi to your brother for me.

Castle has been injected with a slow-acting poison that will kill him in less than hours—but don’t think he’s going to spend them moping around. As long as blood is still pumping through his rock-hard veins, the Punisher plans on killing as many dirtbags as possible. But the Philadelphia underworld isn’t going to roll over so easily. Neither is the top-secret black bag ops unit that dosed Frank. And don’t forget the Mayor of Philadelphia, who only sees one way of saving his already-shaky political career: killing Frank way before his six hours are up.

Retrieved from "https://heykidscomics.fandom.com/wiki/Punisher:_Frank_Castle_Max_Vol_1_67?oldid=1450114"
Community content is available under CC-BY-SA unless otherwise noted.