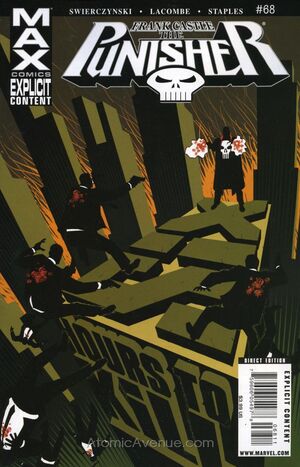 A death squad for hire. And there's only one thing death wants. More death. Any way it can get it.

So much for Brotherly Love…Seems like everyone in Philadelphia won’t be content until they’re staring at the 200-pound corpse of Frank Castle. See, everybody’s gunning for the Punisher tonight — a crooked Mayor, a hot blonde, a pair of dirty ex-cops, a roving gang of executioners, the Russian mob…oh, and the Philly PD and FBI, too. And if none of the above get him, the clock will — thanks to the poison racing through Castle’s veins that will kill him in less than three hours.

Retrieved from "https://heykidscomics.fandom.com/wiki/Punisher:_Frank_Castle_Max_Vol_1_68?oldid=1450115"
Community content is available under CC-BY-SA unless otherwise noted.