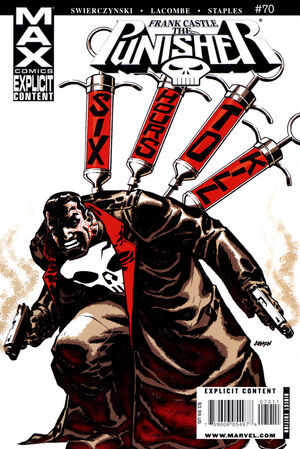 I'm still in hell and there are still people to punish.

Appearing in "Six Hours To Kill 5:No More Second Chances"Edit

Synopsis for "Six Hours To Kill 5:No More Second Chances"Edit

Frank Castle (aka the Punisher), has been injected with a toxin that will stop his heart in six hours. If he wants the antidote, he's going to have to kill a certain businessman. But Castle is nobody's errand boy. Now the Russian Mob, a street gang kill squad hired by the mayor, and the FBI have converged on Castle in a battered bar just two blocks from city hall. And the spooks behind Castle's death sentence have figured out a way for the Punisher to do their bidding - dead or alive. Either way, it's all over in about one hour.

Retrieved from "https://heykidscomics.fandom.com/wiki/Punisher:_Frank_Castle_Max_Vol_1_70?oldid=1450117"
Community content is available under CC-BY-SA unless otherwise noted.