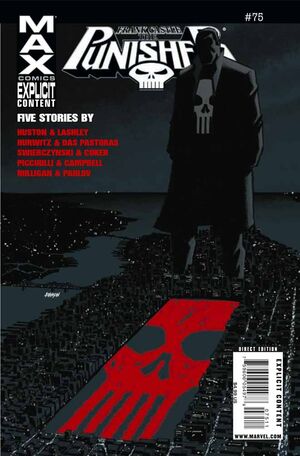 Never look away, not even for a second.

Tom Piccirilli and Laurence Campbell take The Punisher on a walk through New York with only a little girl for company, as he helps her find her father. But he has to make it back to his targets house to kill him before time runs out.

Gregg Hurwitz and Das Pastoras take us back to the late 70's, to witness Frank Castle's first kill as The Punisher.

Peter Milligan and Goran Parlov retrace The Punisher's history in the MAX books via a letter from Lisa Castle,The Punisher's daughter.

Appearing in "Smallest Bit of This"Edit

Synopsis for "Smallest Bit of This"Edit

Charlie Huston and Ken Lashley reveal the true nature of The Punisher as he attacks a group of criminals, and suffers flashbacks of his short time with his family.

Retrieved from "https://heykidscomics.fandom.com/wiki/Punisher:_Frank_Castle_Max_Vol_1_75?oldid=1488910"
Community content is available under CC-BY-SA unless otherwise noted.