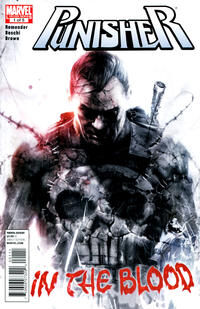 Appearing in "In the Blood, Part One"Edit

Frank Castle is back. Back for revenge. Back in New York. Back to cleaning its streets. Back together, healed and strong, his mission resumed as he partakes in the sweet wet work, and notches up one of the highest body counts in Punisher history. Cyber sensei Henry Russo is back, keeping Frank proficient with an eye in the sky. Others are back as well – two of Frank’s most sadistic enemies united in a new vindictive plot: Enter the Jigsaw Bothers!

Retrieved from "https://heykidscomics.fandom.com/wiki/Punisher:_In_the_Blood_Vol_1_1?oldid=1728439"
Community content is available under CC-BY-SA unless otherwise noted.