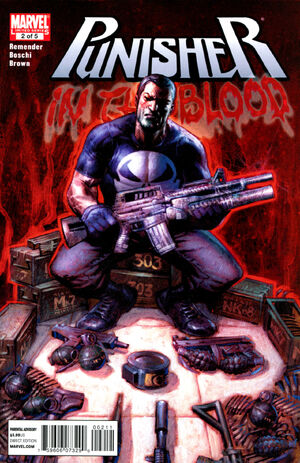 Following Punisher's encounter with the mystery woman, Jigsaw and Stuart (now known as the Jigsaw brothers) tell Henry that Jigsaw is there in order to protect him from the Punisher, believing he is attempting to kill him. Jigsaw escorts his son, Henry, to his warehouse mansion. Stuart visits the warehouse mansion's captive Microchip. He explains that his girlfriend was killed by the Punisher and swears to make him accountable, but his revenge fails. Stuart walks away and tells him that the Punisher is coming. Meanwhile, the Punisher determined to find Microchip takes down multiple gangs to find his target and attacks Mirage and threatens him for everything he knows where Microchip is, but Mirage was shot by the mysterious woman. The Punisher believes that mysterious woman was none other his long-dead wife, Maria.

Retrieved from "https://heykidscomics.fandom.com/wiki/Punisher:_In_the_Blood_Vol_1_2?oldid=1728488"
Community content is available under CC-BY-SA unless otherwise noted.