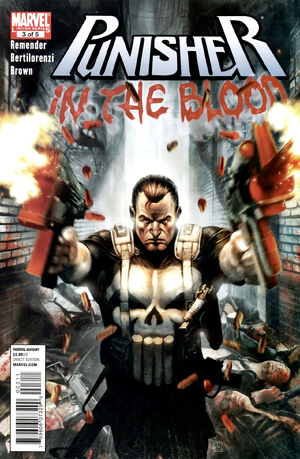 After the apparent revelation last issue, the Punisher cannot get over the fact Maria had been alive following her resurrection by the Hood and seemingly being burnt alive to torture him. The Punisher decides to take down more gangs seeking information of Jigsaw's whereabouts.

Jigsaw and Stuart, meanwhile, are their plans to manipulating the Punisher. Later, The Punisher locates Jigsaw's hideout and kills Jigsaw's men, but the Punisher is confused when Henry confronts him, saying he knows the plans and shocks the Punisher with a taser. Jigsaw is proud his son Henry has subdued the Punisher.

Retrieved from "https://heykidscomics.fandom.com/wiki/Punisher:_In_the_Blood_Vol_1_3?oldid=1722240"
Community content is available under CC-BY-SA unless otherwise noted.