Punisher: In the Blood Vol 1 4 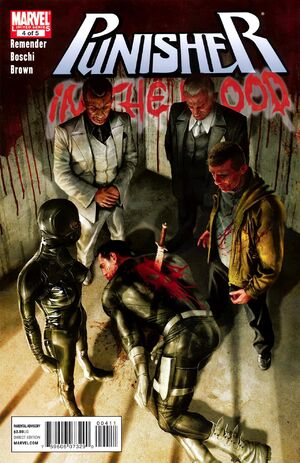 Appearing in "In the Blood, Part Four"Edit

Synopsis for "In the Blood, Part Four"Edit

In his pride, Jigsaw shows his son Henry the monitor renderings where Punisher is held captive. Jigsaw allows Henry to kill Microchip by slashing his throat. Jigsaw got inference by Stuart about his inheritance fund. Henry realizes his father is manipulating the Punisher, has a change of heart, and helps him escape. The Punisher confronts his wife, Maria, but is unwilling to kill her when she has already died before. Maria attempts to burn him with a flamethrower, but the Punisher receives a call from Henry revealing that Maria is actually a female assassin posing as Maria. The Punisher kills the imposter. Henry is caught by Stuart, who cuts his arms with razor blades, but Jigsaw stabs Stuart, who tells him, he is wrong. Jigsaw promptly shoots Stuart, then attempts to kills his own son.