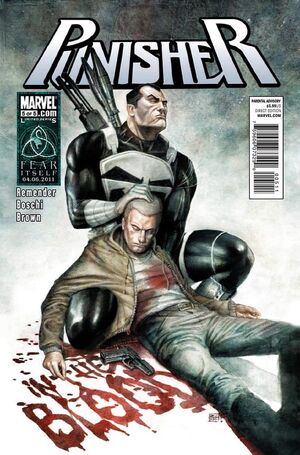 Appearing in "In the Blood, Part Five"Edit

Synopsis for "In the Blood, Part Five"Edit

Unaware of what's going on, Jigsaw attacks his son in pain, until he stops upon seeing his young Henry. Jigsaw apologizes for what he did, but Henry has already discovered the truth and kicks him away. With the warehouse on fire following the fight, Henry escapes to the roof where he is met by the Punisher and Jigsaw. The Punisher and Jigsaw begin a brutal hand to hand fight during which Henry finally tells his father he wants a normal life. Jigsaw is able to render the Punisher unconscious but the roof gives way. Henry reaches for his father and grabs his arm trying to save him. Jigsaw smiles and lets go of Henry's arm, taking his own life. Henry is about to fall in afterwards but is saved by the now conscious Punisher. The Punisher forces Henry to leave and not search for his father. Weeks later Henry and his mother are seen relaxing and beginning their new life free from Jigsaw.

Retrieved from "https://heykidscomics.fandom.com/wiki/Punisher:_In_the_Blood_Vol_1_5?oldid=1722242"
Community content is available under CC-BY-SA unless otherwise noted.