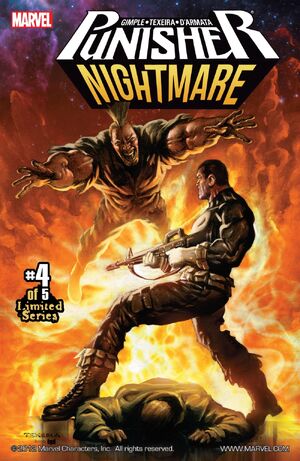 • A Special Forces soldier is injured and his family killed in the midst of a mob execution in Central Park, but this isn't Frank Castle. This time it's a young soldier named JAKE NIMAN, but the familiar story puts Frank on the path of punishment!
• As Jake Niman heals from his wounds, why is he growing strangely stronger? • And who is the mysterious Johnny Nightmare?
• Bullets fly, anarchy reigns, allies become enemies, the Punisher becomes the punished, and no one is safe!!!

Retrieved from "https://heykidscomics.fandom.com/wiki/Punisher:_Nightmare_Vol_1_4?oldid=1450132"
Community content is available under CC-BY-SA unless otherwise noted.