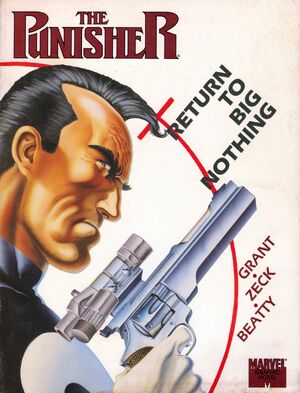 They laugh at the law. The rich ones who buy it and twist it to their whims. The other ones, who have nothing to lose, who don't care about themselves, or other people. All the ones who think they're above the law, or outside it, or beyond it. They know all the law is good for is to keep good people in line. And they all laugh. They laugh at the law. But they don't laugh at me.

Appearing in "Return to Big Nothing"Edit

Synopsis for "Return to Big Nothing"Edit

Retrieved from "https://heykidscomics.fandom.com/wiki/Punisher:_Return_to_Big_Nothing_Vol_1_1?oldid=1504338"
Community content is available under CC-BY-SA unless otherwise noted.