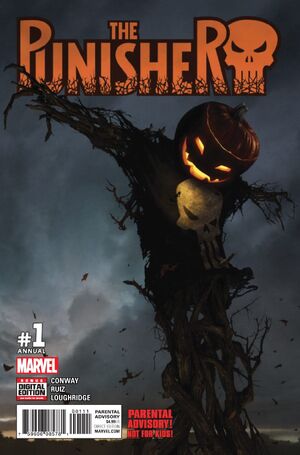 “REMOTE CONTROL” The Punisher faces his greatest challenge yet: Trapped in the throes of a hypnotic spell, Spider-Man’s gone psycho and he wants to grind Frank Castle’s bones to paste! And since Spidey’s not really to blame for his actions, Castle faces a dilemma: Fight (the only way he knows how) or die. Can the Punisher survive a bloodthirsty Wall-Crawler long enough to disconnect him from the control of the Dirty Dozen’s leaders, Letha and Lascivious? Super-star artist Jason Pearson joins regular series writer Rick Remender.

Retrieved from "https://heykidscomics.fandom.com/wiki/Punisher_Annual_Vol_7_1?oldid=1722228"
Community content is available under CC-BY-SA unless otherwise noted.