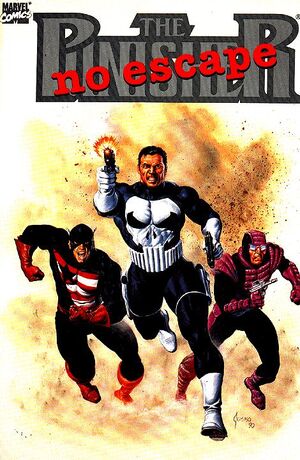 Tracking down murderous drug-lords and making them pay for their crimes is hard work, especially when the man you can't find has hired the super-strong and ultra-equipped free-lance agent Paladin to kill you first. It doesn't make it any easier that the augmented almost-Captain America known as the U.S.Agent is after you as well! Just ask the Punisher, if he survives!

Retrieved from "https://heykidscomics.fandom.com/wiki/Punisher_No_Escape_Vol_1_1?oldid=1450436"
Community content is available under CC-BY-SA unless otherwise noted.