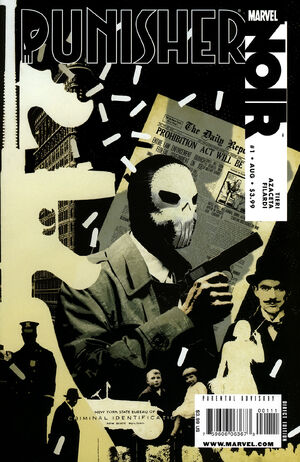 It ain't right, understand? And when somethin' aint right, ya do somethin about it. Ya just can't sit an' do nothin' Frankie.

Appearing in "Home is where the WAR is"Edit

Synopsis for "Home is where the WAR is"Edit

As he readies for war on mobsters, The Punisher thinks back to how he became who he is today.

His father learning to fight in World War I, his mother dying of cancer, the mobsters who tried to take the hard-earned money from their grocery store, they all added to his future.

Retrieved from "https://heykidscomics.fandom.com/wiki/Punisher_Noir_Vol_1_1?oldid=1450437"
Community content is available under CC-BY-SA unless otherwise noted.