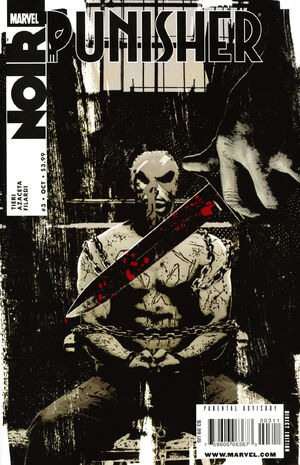 There. Now ya ain't gonna have to wear that mask no more.

The new Punisher is out to get revenge on those who killed his father a few years ago. He's finally able to get the name of the mysterious woman who was with them, who turns out to be the same Russian who his father had dropped a grenade in the pants of nearing the end of World War I.

Retrieved from "https://heykidscomics.fandom.com/wiki/Punisher_Noir_Vol_1_3?oldid=1450439"
Community content is available under CC-BY-SA unless otherwise noted.