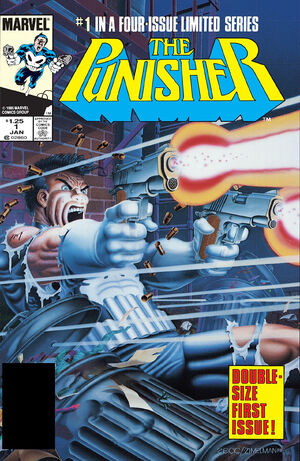 Appearing in "Circle of Blood"Edit

Synopsis for "Circle of Blood"Edit

The Punisher arrives at the prison on Ryker's Island. He is watched by every prisoner, and also by the warden Gerty and his aid, who both talk about the possibility to use the Punisher in their plans (which we do not know still).

After smashing down his cell's partner, the Mule, the Punisher starts investigating who might had poisoned him in his past time in prison. Looking after the cook he gets to the one who got him drugged him: Jigsaw.

They fight and the Punisher crashes a bottle in Jigsaw's hand, but then Don Cervello enters and stops the fight. Cervello is the boss among the prisoners and he also has some guards in his pocket. The Punisher figures out there is an escape in progress and makes Cervello include him in the pack of escaping prisoners.

But the following days the Punisher sees that Cervello has other plans for him and suspects Cervello is planning his death. The night of the escape arrives and Cervello sends Gregario, one of his men, to kill the Punisher. But the latter simulates his death and follows them.

The Punisher could escape alone, but decides to stay and stop all the prisoners escaping before they get out of the prison and endanger innocent people in NY. So he assaults a security tower, shoots down Gregario and avoids the escape.

Only Jigsaw and Cervello keep running, kill a guard and get to the ward's office.

The Punisher gets to the ward's office two and hands on a failed gun to the Jigsaw, who shoots it and gets hurted. Cervello threatens the warden but the Punisher does not care about the warden's life so Cervello surrenders and is caught by the arriving police officers.

Then the ward tells the officers to leave the Punisher with him, and tells the Punisher about the Trust, a secret organization of industrialists, financiers, ex-military, movie stars, journalists and more, who want to figth criminals with methods beyond the law. Like the Punisher itself, who accepts to work for the Trust in order to get his equipment back and get out of prison.

In the end, the gangster boss Charlie Siciliano meets his nephew Tony Massera, the son of a gangster dead by the Punisher some months ago and hands him a gun to kill the Punisher himself.

Retrieved from "https://heykidscomics.fandom.com/wiki/Punisher_Vol_1_1?oldid=1450462"
Community content is available under CC-BY-SA unless otherwise noted.