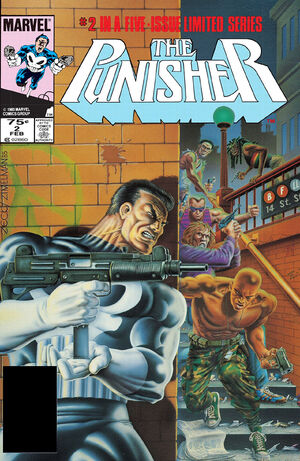 Appearing in "Back to the War"Edit

Synopsis for "Back to the War"Edit

The Punisher assaults the Kingpin's tower in order to kill the man, but he finds a polynesian decoy of him dead there.So he pressumes the Kingpin wants everybody to think he is dead. But no one thinks that,as the Punisher finds out after calling Alaric, his contact in the Trust.

So he makes a phone call to Ben Urich to tell him he murdered the Kingpin. Then he leaves and is shot and his van explodes. Injured, is collected from the floor by a mysterious woman.

The Punisher awakes in her room and she tells him her name is Angela and is there to give him all.They make love. After that, the Punisher leaves and is followed by Tony Massera. Having told to the press that the Kingpin is dead starts the war among the gangsters that he wanted in the first place. Several bosses die. But the war gets out of control and innocent people pays the price with their lives.

So the Punisher decides that he needs help and calls Alaric again. He cannot know it but Angela works for Alaric.

Retrieved from "https://heykidscomics.fandom.com/wiki/Punisher_Vol_1_2?oldid=1450463"
Community content is available under CC-BY-SA unless otherwise noted.