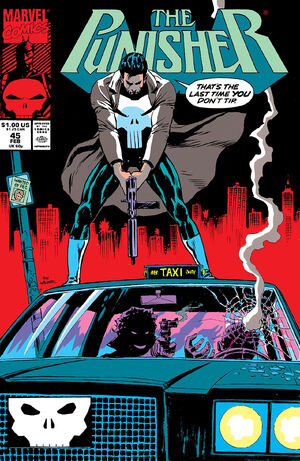 There're over eleven thousand cabs in New York City. And almost nobody has a good word to say about any of them. But when it's raining New Yorkers keep their opinions to themselves. They hate the cabbies even more. New York cabbies are near legendary for their surliness and indifference. It's their suit of armor. But somebody out there hates them with more than the usual venom. Five cabbies in as many weeks. All done with a .44 Magnum. Probably a Charter Arms Bulldog. David Berkowitz's weapon of choice. No sex angle. No big names. The press is ignoring. The cops have better things to do. Time for me to pull a few late nights.

Appearing in "One Way Fare"Edit

Synopsis for "One Way Fare"Edit

Retrieved from "https://heykidscomics.fandom.com/wiki/Punisher_Vol_2_45?oldid=1450511"
Community content is available under CC-BY-SA unless otherwise noted.