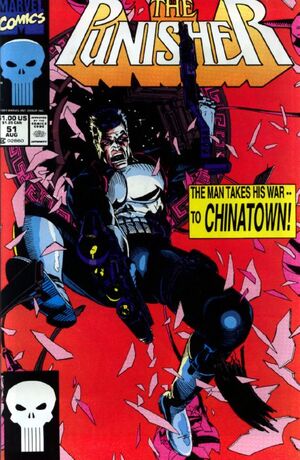 Funny thing about Uzis - the smaller they are, the faster they shoot.

Frank Castle is eating in the back of the Golden Buddha restaurant when three Savage Tigers storm in and try to rob the place. One threatens Castle with a shotgun but gets stabbed in eye with chop sticks for his trouble as the other two retreat, leaving two murdered in the kitchen and kidnapping the cook, Charlie. Li Pung reveals the Tigers illegal immigration racket, bringing over people for Hong Kong in exchange for cash and had threatened to kill Charlie if he did not pay.

Castle returns to Microchip's for his help but he claims he can't conduct any computer research due to Repetitive Motion stress despite watching television, which draws Frank's ire. Castle comes across a Vietnamese gang known as the Royal Cobras and sees them as a means to go after the Savage Tigers.

At Khieu Gardens, Punisher asks to see Rupert Duc, which draws an armed response. Duc steps forward and says if he wishes to talk, Punisher must fight him. They spar with Duc gaining the early advantage but Punisher eventually defeats him. Duc expresses a disinterest in fighting with the Tigers but does mention the Golden Buddha, a 30-foot statue stolen by Chinese troops from a temple in Laos and rumor has it is now in New York City.

At the docks, Marty Siu prepares to torture Charlie, who is revealed to be former Chinese Army Colonel Camden Leung, with a blowtorch but stops when Leung challenges to face him like a man. Siu beats him badly and prepares to resume his original plan when Leung pleads for mercy and that he can lead him to the Golden Buddha.

Punisher and the Cobras arrive at a dock warehouse owned by the Pearl of the Shadowed Enlightenment where Fong takes out the guard with a ninja star. Once inside, a gunfight breaks out between the two groups as Duc recognizes Leung as the man who killed his father alongside the North Vietnamese army. Leung takes Siu's gun and leads the Tigers in a flanking manuever around the building, which Punisher saw coming and repositioned the Cobras to ambush them. Siu is among those gunned down but Leung keeps shooting. Punisher disables him from behind and tries to convince him to help him and therefore help Li Pung. Before Leung can respond, Duc shoots him. Punisher slugs him but Duc has already fulfilled his blood oath.

Back at the restaurant, Castle warns Li Pung, who was the man Duc referred to as the Butcher of Ah Loc and whose command Leung served under, he has twenty-four hours to return the Golden Buddha before the Royal Cobras come after him and expresses his displeasure with losing the one place he could come to relax.

Retrieved from "https://heykidscomics.fandom.com/wiki/Punisher_Vol_2_51?oldid=1450517"
Community content is available under CC-BY-SA unless otherwise noted.