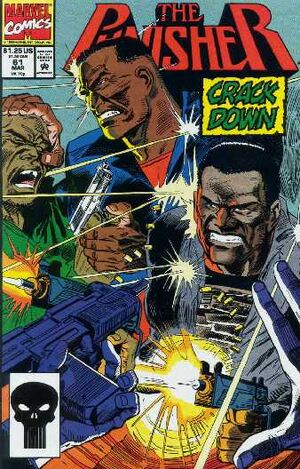 Frank, now going by Rook is continuing to work with Cage, as he copes with not being the Punisher anymore. AS they try to clean an apartment of drug dealers, their differing views of how to "deal" with the criminals puts them at odds. As the issue ends, higher-up crime bosses decide if this rook is the believed dead Punisher, Cage (after their mission is completed), notices that Rook looks pale...

Retrieved from "https://heykidscomics.fandom.com/wiki/Punisher_Vol_2_61?oldid=1450527"
Community content is available under CC-BY-SA unless otherwise noted.