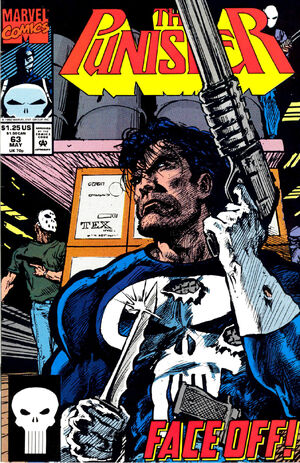 No matter where you turn, there's a decision to be made. Life or death. Right or wrong. Regular or crunchy.

Appearing in "The Big Check-Out"Edit


Synopsis for "The Big Check-Out"Edit

Not even a simple trip to the grocery store is easy for Frank Castle, a.k.a. The Punisher. While staking out a crack lab, Frank gets a call from Microchip, his only friend and weapons expert to pick up some things from Goliath Supermarket. Frank does the shopping not knowing a gang of four drugged-out losers are set to rob the place.

When the thugs start shooting guards and threatening the lives of innocents, Frank goes to work. He clears the aisles of the hapless shoppers before sneaking into the back-room to "take care" of one of the robbers. Now, armed with the robber's shotgun and shutting the main lights off, Frank is able to pick the other robbers off one by one using many different tircks at his disposal. One trick is using a shopping cart filled with chemical products and cleaners as a "gas bomb".

Frank uses a bag of money filled with lobsters to get rid of the final robber before making a hasty retreat. As the cops show up at the scene, Frank runs out the backdoor dropping the shotgun into a dumpster and keeping the bag of lobsters as a repayment to Microchip.

Retrieved from "https://heykidscomics.fandom.com/wiki/Punisher_Vol_2_63?oldid=1450529"
Community content is available under CC-BY-SA unless otherwise noted.