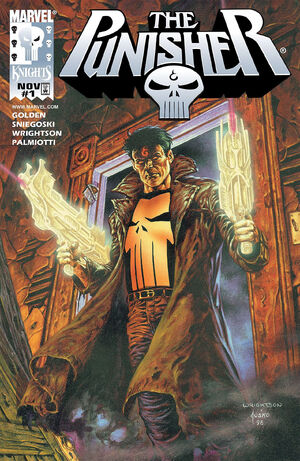 I caught a glimpse of heaven once. The angels showed me. The idea was I'd kill for them. Clean up their mistakes on Earth. Eventually redeem myself. Tried it. Didn't like it. Told them where to stick it.

Appearing in "Welcome Back, Frank"Edit

Synopsis for "Welcome Back, Frank"Edit

The issue begins in the aftermath of a drug deal broken up by the Punisher. In a rare show of mercy the Punisher lets off the only survivor with a warning. However, immediately after the survivor brags about his survival and his plans to sell the drugs anyways. Punisher hasn't completely left, comes back, snaps his neck, and blows the warehouse to smithereens.

Frank Castle is revealed to be living in a run down apartment under the pseudonym 'Mr. Smith' along side a group of eccentric but well meaning neighbors. From here he secretly runs his war on crime.

At the city morgue, local crime figure Bobby Gnucci, member of the Gnucci crime family, inspects the corpse of his recently killed brother. In a surprise attack the Punisher wipes Bobby and his small team of guards out handily. It seems the Punisher's current plan is to wipe out the Gnucci's one by one, his next target being Carlo Gnucci.

The Punisher catches up with Carlo at the Empire State Building, taking his date to see the view from the top. Punisher follows him and tying him up, tosses him from the top and watches him splat against the pavement. The Punisher is back in New York City and there will be hell to pay.

Retrieved from "https://heykidscomics.fandom.com/wiki/Punisher_Vol_4_1?oldid=1450188"
Community content is available under CC-BY-SA unless otherwise noted.